Backups: How To Make Them And Why

There are two types of system administrators: those who don’t make backups *so far* and those who *already* do. There is always a chance that due to different circumstances (such as out-of-date CMS being compromised or a file being deleted by mistake) all your efforts to develop the project can go to the dogs. Regular backups will help to save your data and your heart in such cases.

First, we would like to tell about making backups of the virtual hosting accounts. Since our virtual hosting uses cPanel interface, many users are used to make a backup through the panel itself. In the process of the backup creation with the help of cPanel, the archive is downloaded via browser to the local PC or via ftp to the remote client’s server. However, such procedure is not very convenient and in the latter case it requires an ftp server and enough disc space on it.

As an alternative, we provide Continuous Data Protection (CDP). We have first tested this technology in making backups of our internal resources. The test was successful and so it was decided to offer CDP option to our customers (already enabled for our S3 and S4 virtual hosting plans). The main advantage here is usability. Backups are created daily without requiring any actions from the user. There is one backup (recovery point) for each of the last seven days and also one for each of the last two months available to the user. All the files stored in the recovery point can be viewed through a friendly interface. You can restore or download a separate file as well as the whole backup.

What is the process of backup creation?

CDP-agent is installed on the server needed (in our case, it is virtual hosting server). The agent receives all the calls from the CDP-server and follows them under control of that server. The server is a ‘brain’ in the client-server team, it provides a user-friendly interface for managing backup creation process and also works as the storage for the backups.

The CDP-agent operates at the low level, it is in fact a module of the OS kernel. Following the first call of the server, the agent creates a table in which it divides the hard drive into logical parts and then sends the information stored in the needed parts to the server (this is called replication). After that the agent keeps monitoring the parts and marks the ones which are changed. During further calls of the server the agent transfers only the marked parts which enables fast backup creation, saving processor’s time and network bandwidth for maintaining the clients’ websites. The point is that during one day (at the moment we use this time frame) only small amount of data is changed. Since only changes are sent to the server, the transfer is getting much faster.

Only the parts created during the first replication are stored on the CDP-server in full. During further replications only the changed parts are stored. Instead of the parts which were not changed, the links to the parts of the previous replication are created. Also, there is a database with the description of the parts and so they can be easily managed. Thanks to such approach, it is possible to reduce disc space which is used for storing backups. If the user would like to download a specific backup to his PC in full, the server searches its database and creates the requested copy by combining the needed parts.

An illustration to the creation of the two first backups: 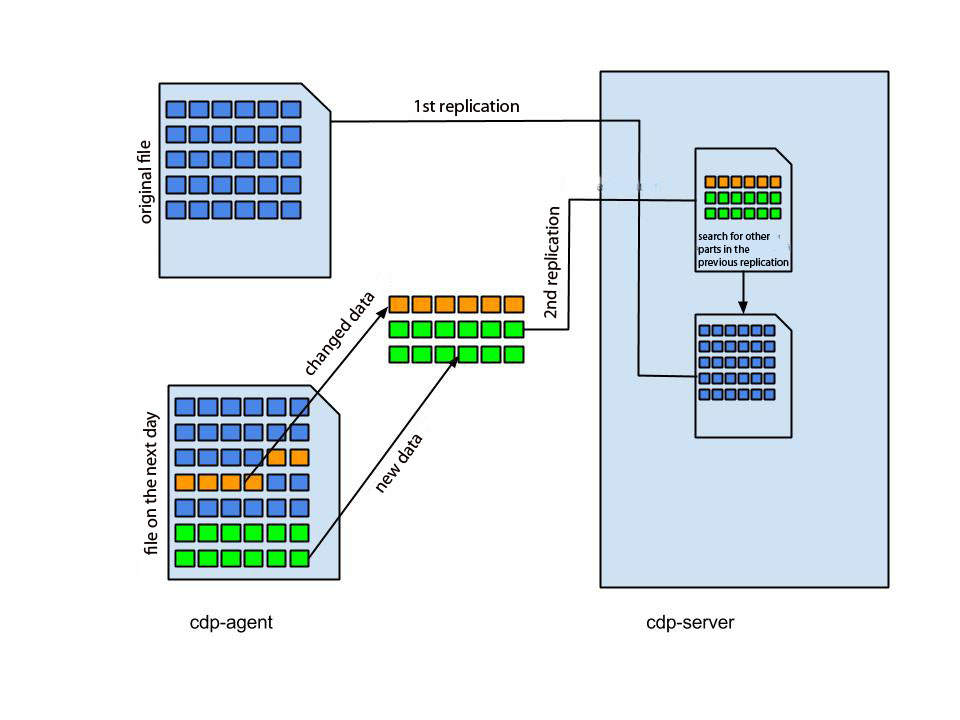 What is the process of making database backups?

Along with the files backups, a separate backup containing all databases of each cPanel account on the virtual server is created. It is possible to restore either the whole database or separate tables. It needs to be mentioned that the restoration is processed by our technical department and the user has no such option.

The good news is that our VPS servers also have the CDP-agent installed. However, backups are made for internal purposes only and the users have no access to the corresponding interface. It may sound as a disadvantage at first. But in real we treat this matter with full responsibility and make backups every week (also, an archived copy is created every month and stored for several months). So, if necessary, we will meet your request and assist with restoration of the data or provide a backup.